Been a little quiet this year as I've been primarily playing with Unity or working on writing a couple of stories over the past few months. Nothing to post on that front just yet, but we'll see.

I've also finally been swayed into trying Instagram and Tumblr, so check those out (there's a feed on the right). We'll see what sticks.

In the meantime, here are a couple of cards I made this year for my wife and some friends... 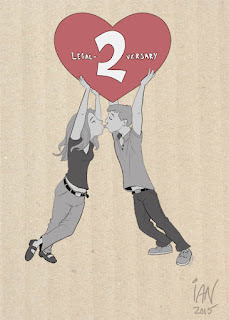 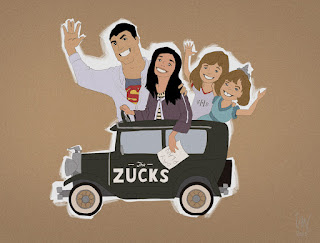 Posted by Unknown at 8:14 AM No comments: 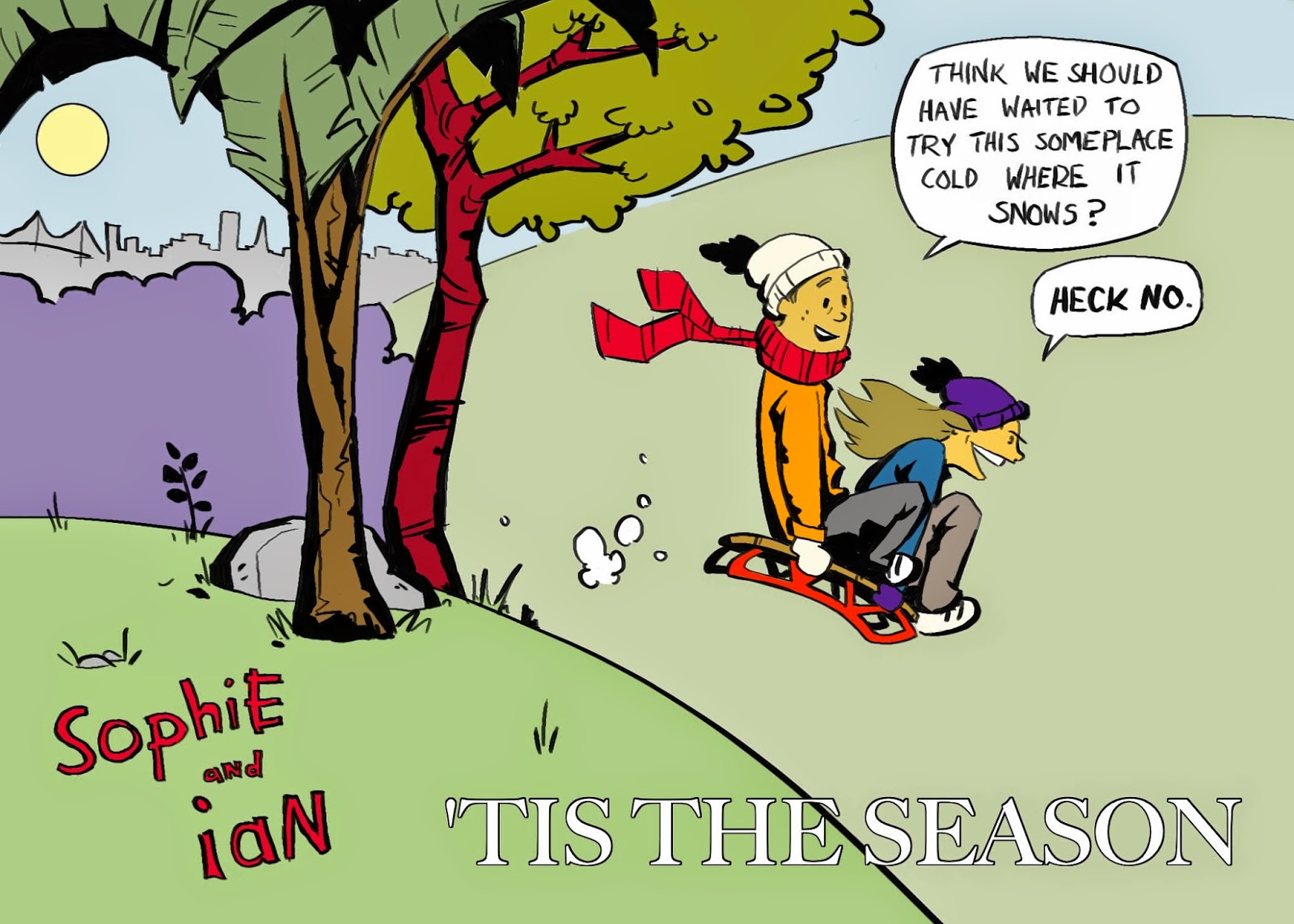 Making some steady progress... Have some outstanding eye, mouth & jawline notes to do after the break; stepping back to look at these images is very helpful to find things to improve next time. Starting to really see the value of a good rake tool... as well as this gem from Felipe Faraut's tool store. 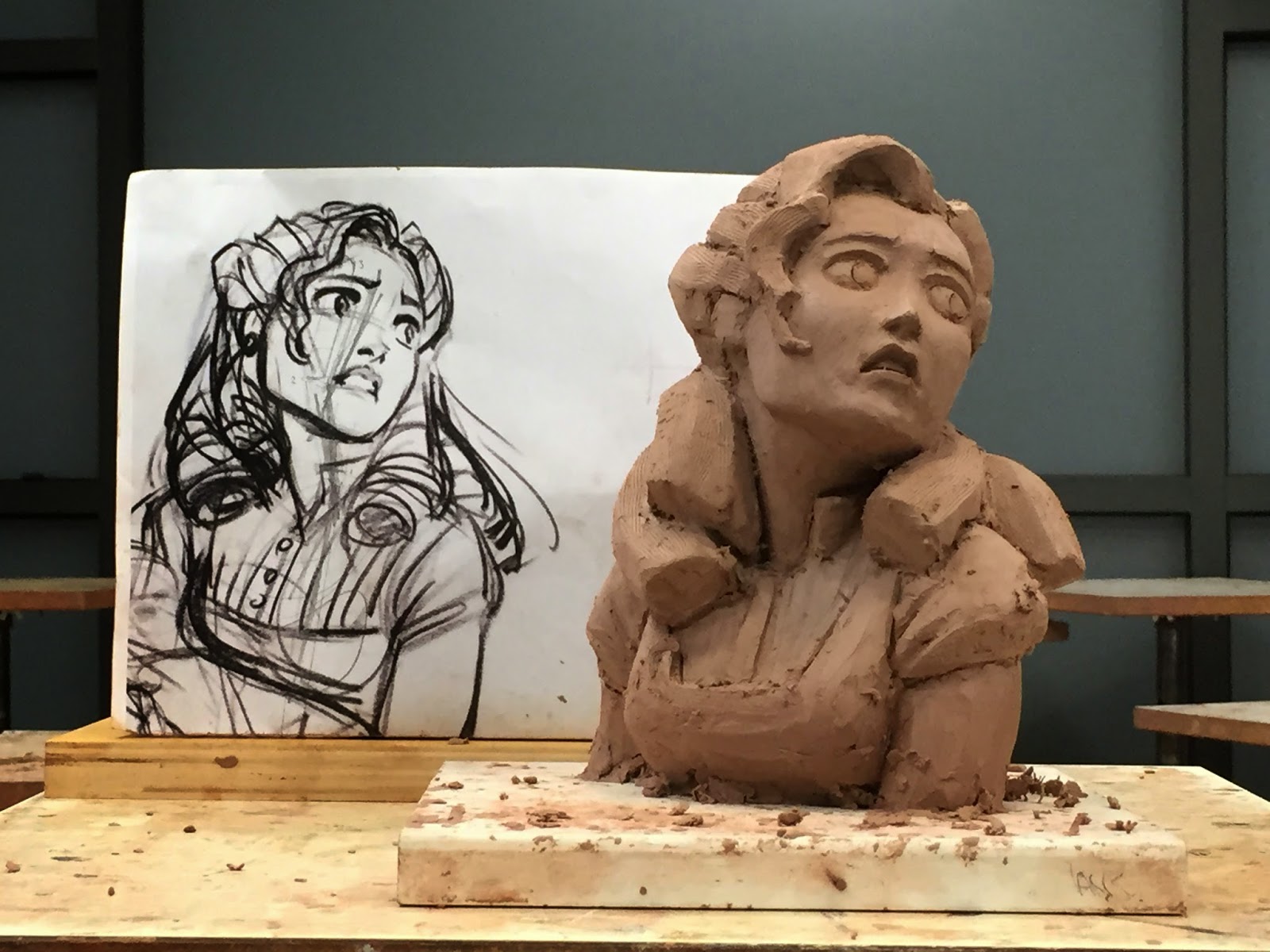 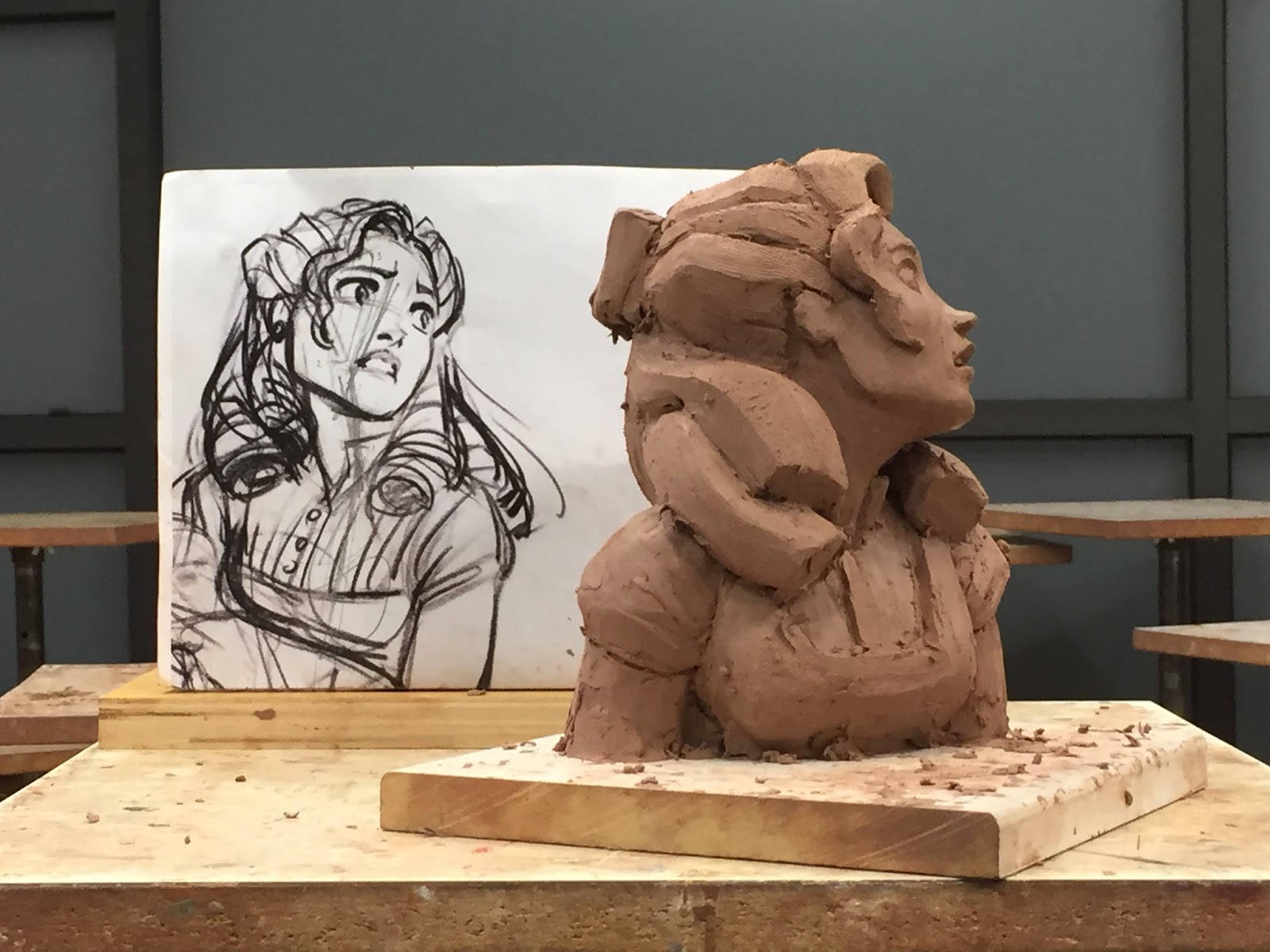 With Disney/Pixar's Toy Story that Time Forgot finally out there, here's a side project inspired by it from earlier in the year! After wrapping from a brief stint on that show at work, my inner 80s kid felt the Battlesaurs world was just too cool to leave so quick.  Taking a little inspiration from Glen Keane to let that kid out to play, I decided to create my own, independent "fan art" / unofficial gladiators at home in ZBrush with the ultimate goal of learning how to make an action figure via 3d printing!

Huge thanks to Tim Evatt, the always-energizing character designer on the show, who lent his design guidance/feedback to the process. The Stegosaurus below is my own design, and the Crocodile took inspiration from a sketch Tim had made (not something used on the actual show). Also thanks to Daniel Arriaga for some great pointers and his online character design class, and Alonso Martinez for his feedback in getting to know the intricacies of the Makerbot Replicator 2 printer.

Just to reiterate, these are not official Disney/Pixar Battlesaurs / Toy Story models - they are fan art, pure and simple. They were not as part of my Pixar work, don't appear in the show, and are not going to be sold as toys. I just made them for pure amusement as an independent experiment. They're not ultra polished either, as the goal was more having fun with the subject than perfecting.  That said, let's see them!

First up, the Crocodile that Tim inspired. Had some fun in ZBrush on this guy and dabbled with the underlying construction (how it might relate to a 3D Print): 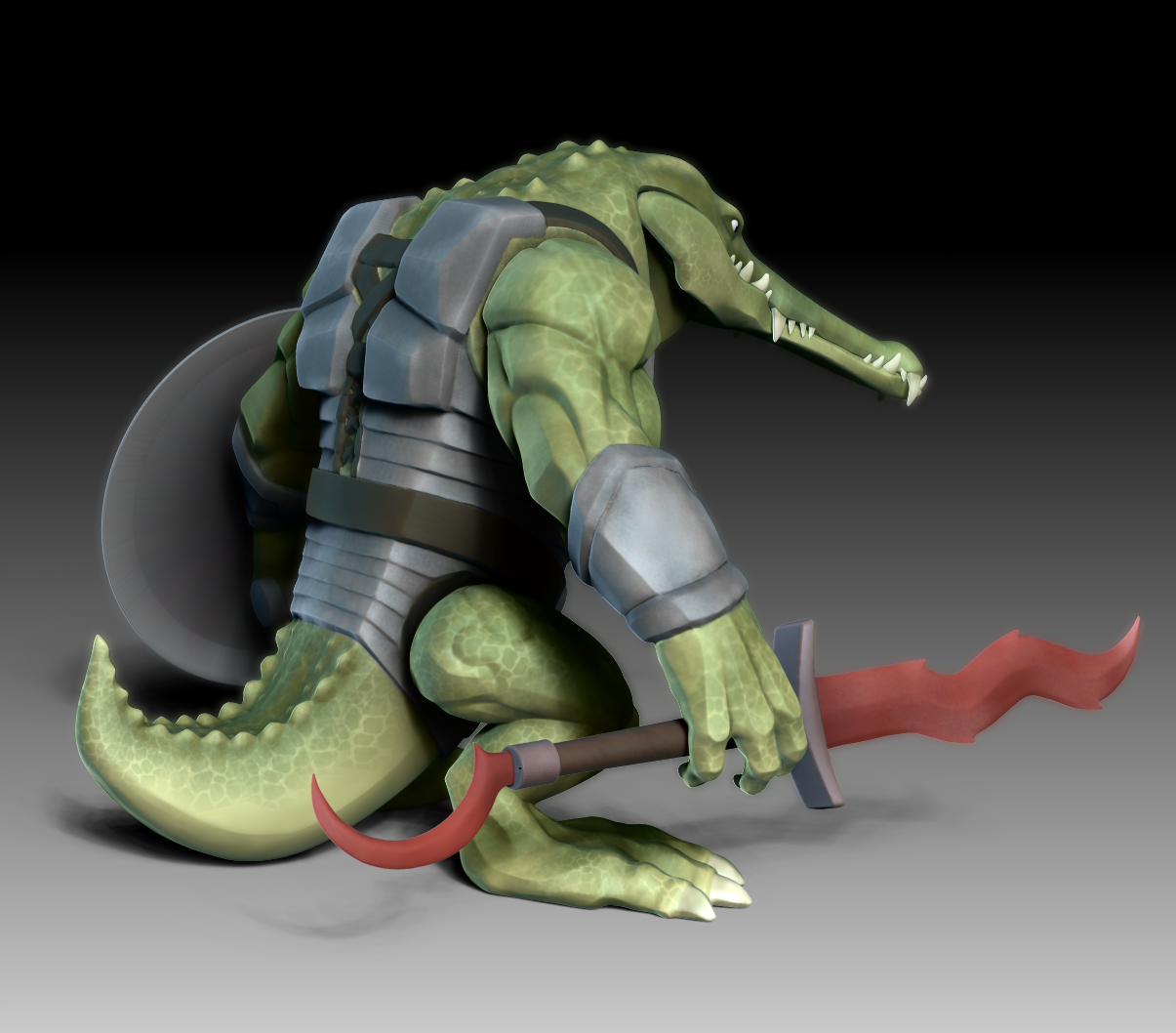 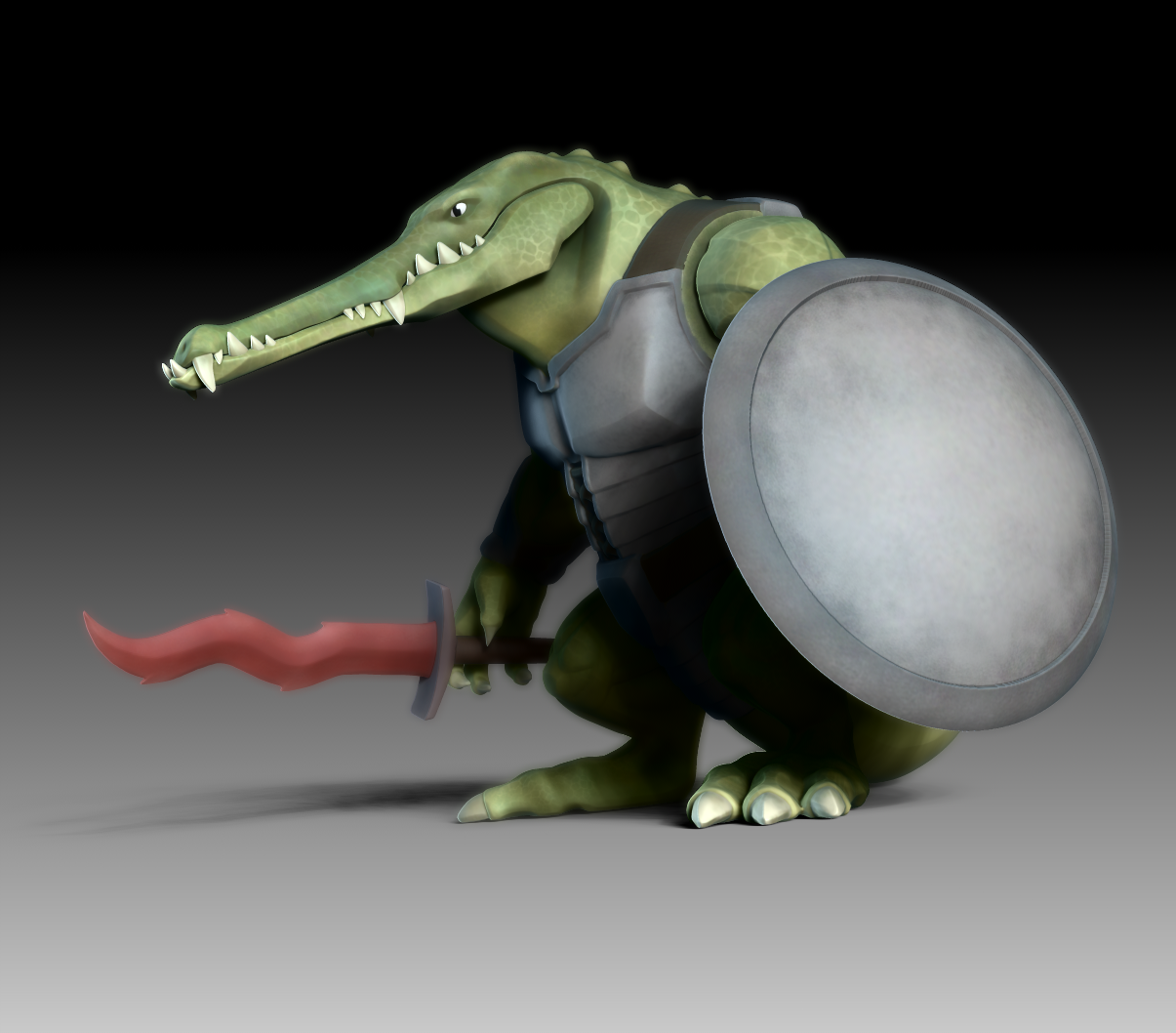 As the Stegosaurus was always a personal favorite dino, I moved on from that to make this fully original design. Along the way I was thinking more about creating this guy to be modular; Not visible here are all the keys, sockets and modular parts underneath the limbs that would come in handy for assembly later: 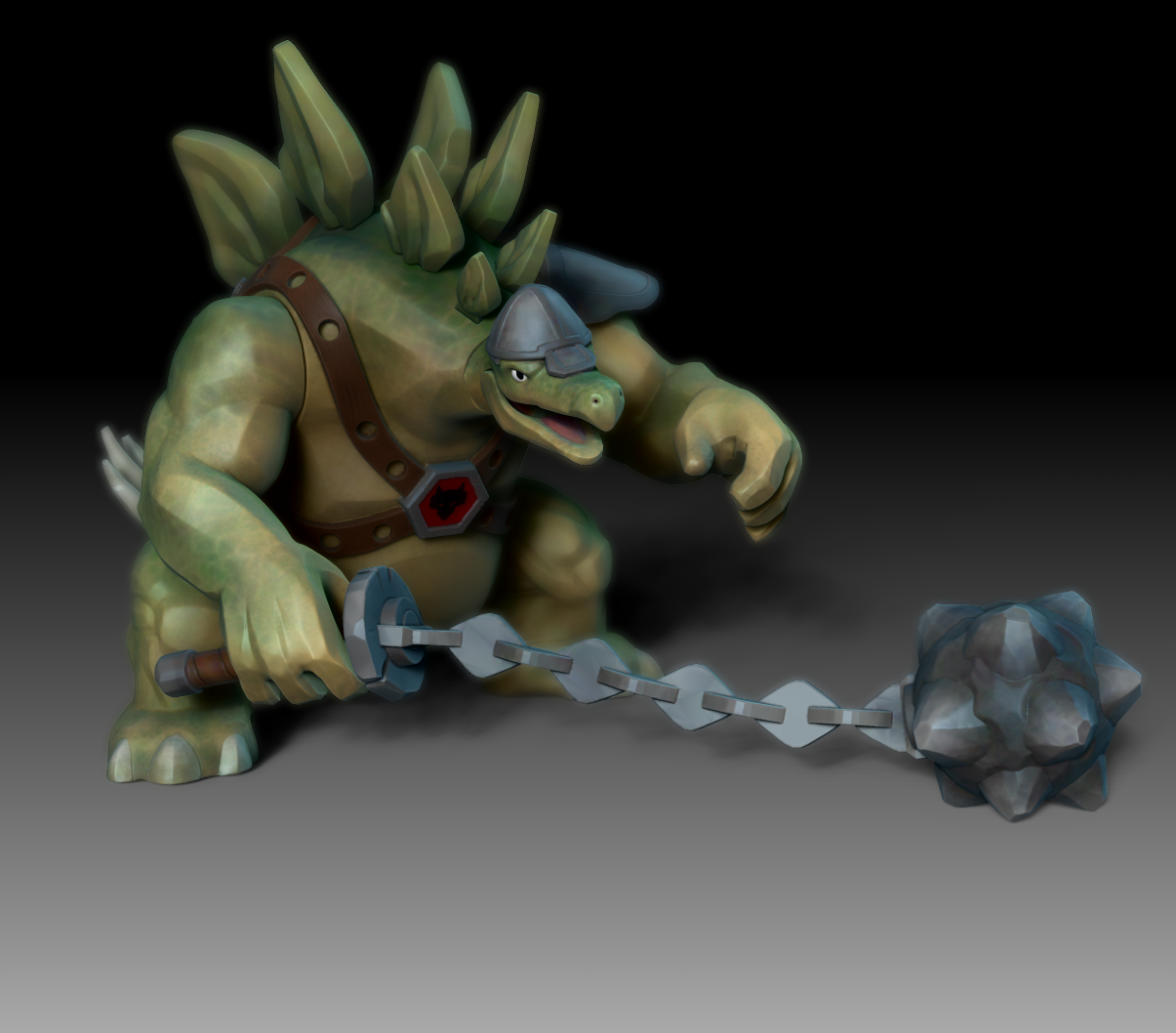 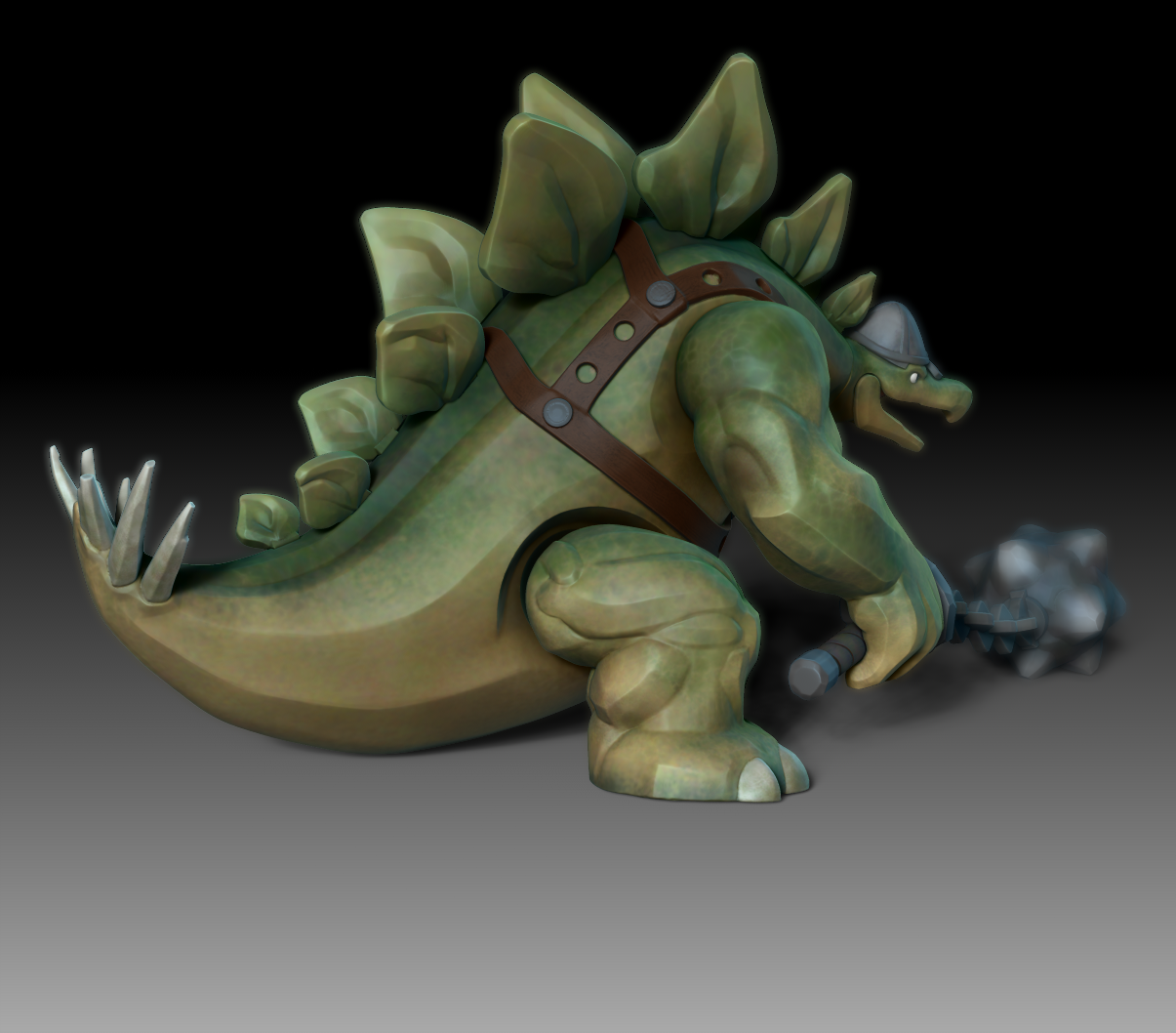 Part III was bringing one of these into reality with an articulated 3D print.  It took a whole lot of trial and error to get this to work on a Replicator 2, as I think this is really pushes that machine's capabilities.  The biggest lessons came from designing articulation joints and learning how to cut up & key the model to minimize support material (It's awfully tough to clean up!).  Thanks to Mold 3D for some great tips that got me started in the right direction. Fist bump: 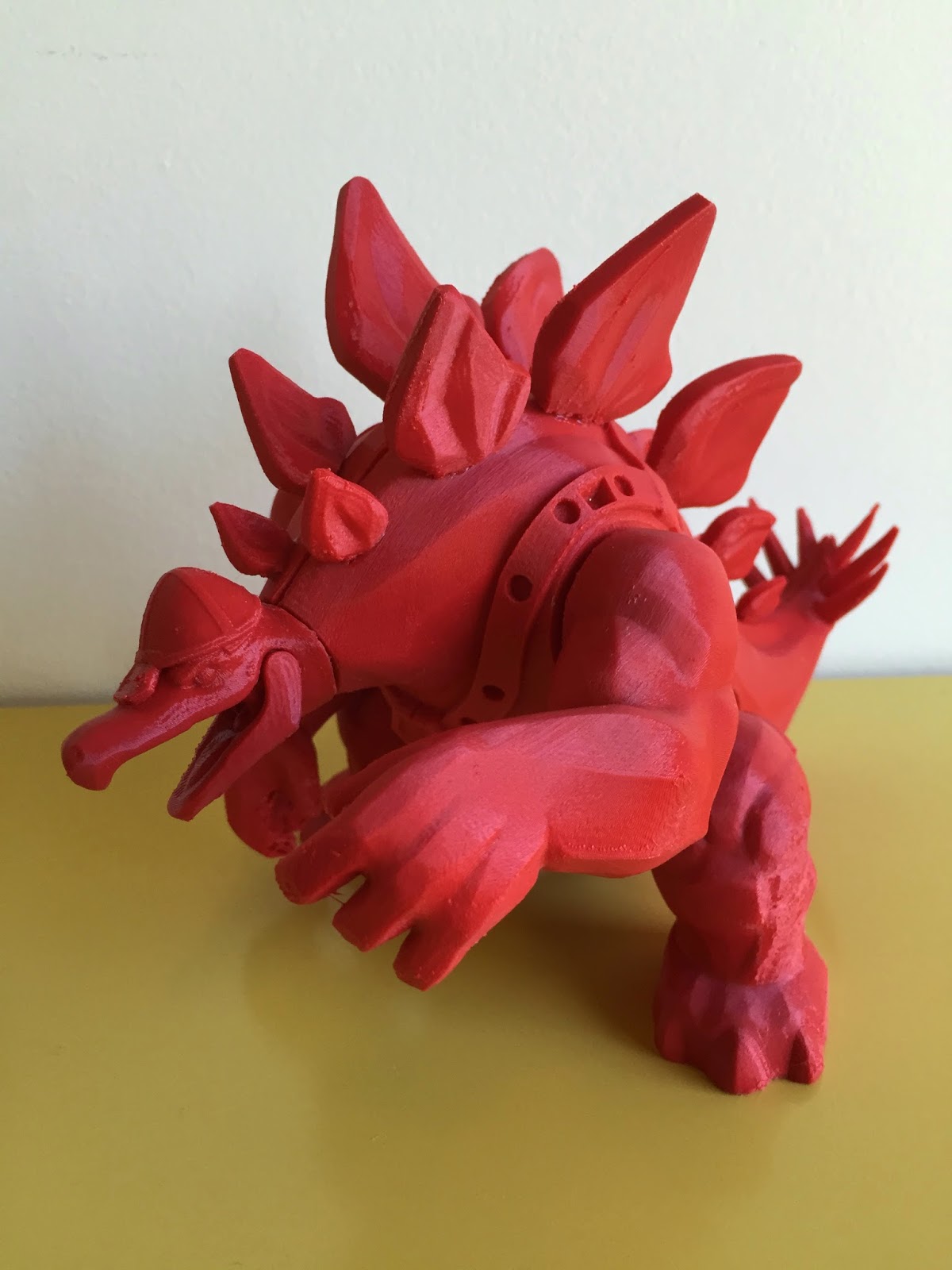 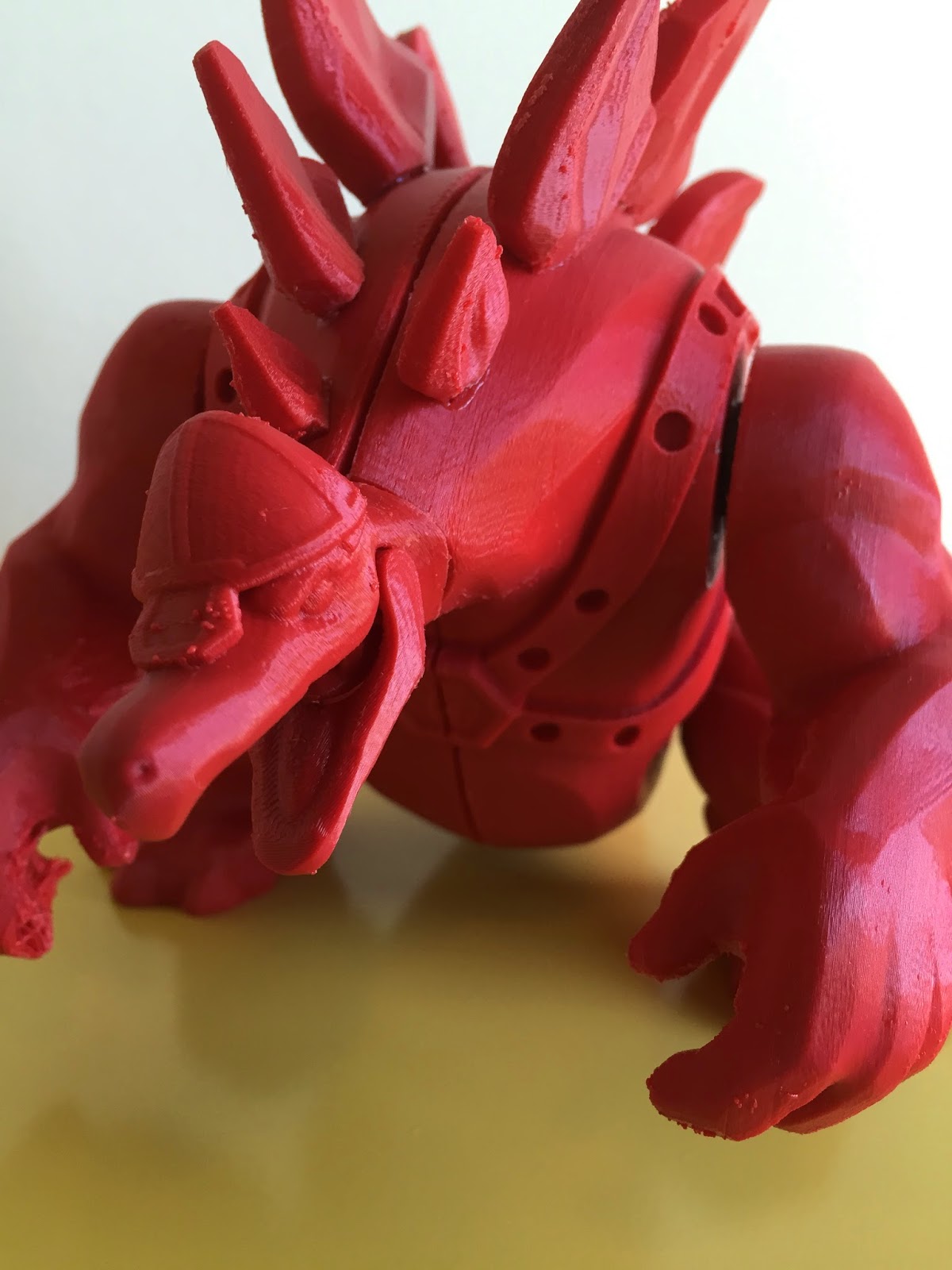 Having started with very little knowledge of printing, these images actually represent my second swing at this model, and there's still a bunch more I could have done if I didn't need to move on to the next thing. The final print is about 5" tall by 7.5" long.  You may notice that the shoulder armor is missing, and that the fingertips didn't print cleanly: Some visible lessons in cutting up a model for next time! However, I was really happy with how the body essentially just snapped together without any glue, and the joints printed very snugly... Though due to the nature of the PLA material used being somewhat soft and printing in rows, those joints became smoothed over and loosened with use.  If I really wanted to get a useable toy print done, I'd probably need a printer with finer resolution than 100 microns... or do a whole lot of sanding - no thanks ;) 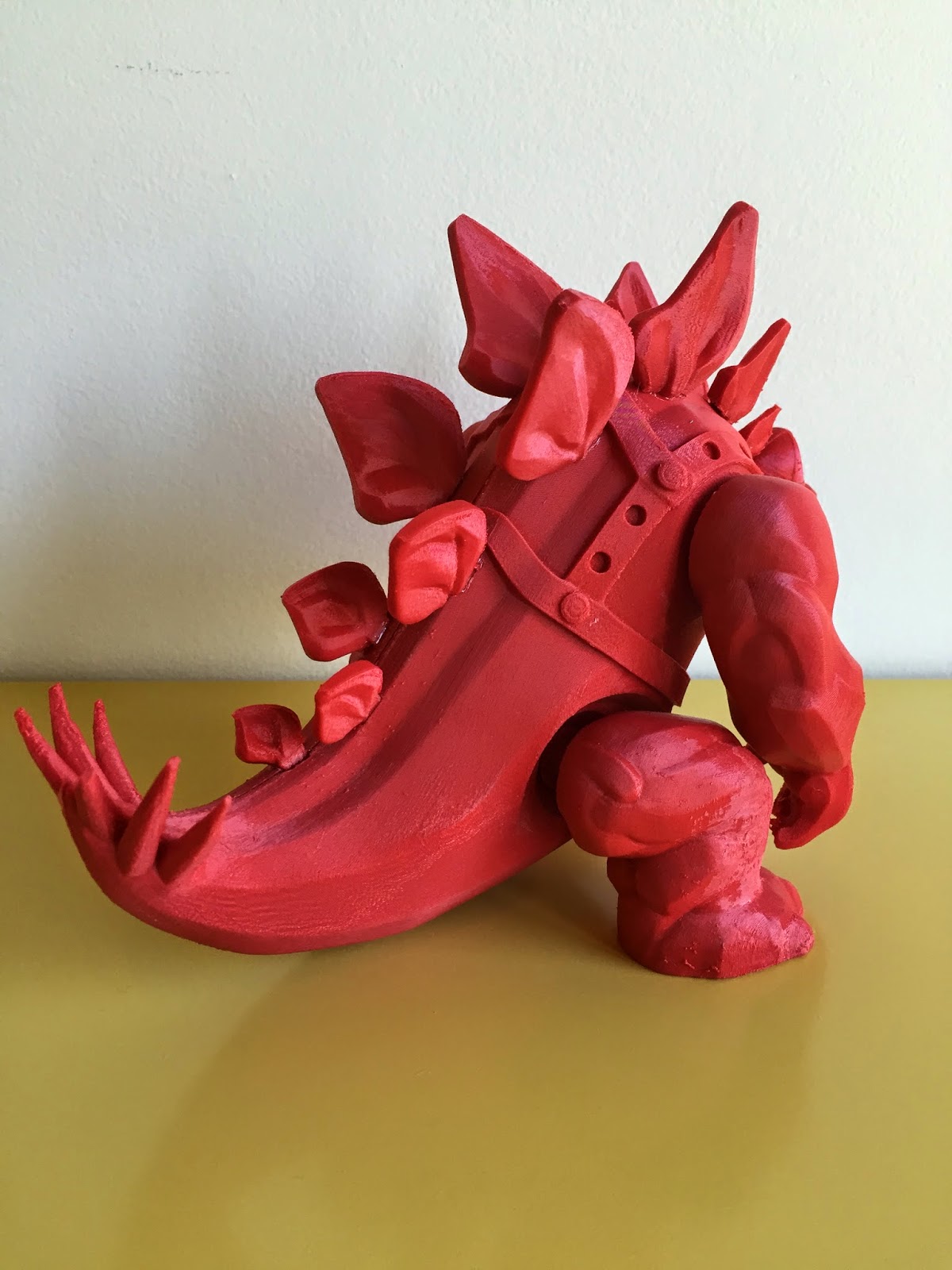 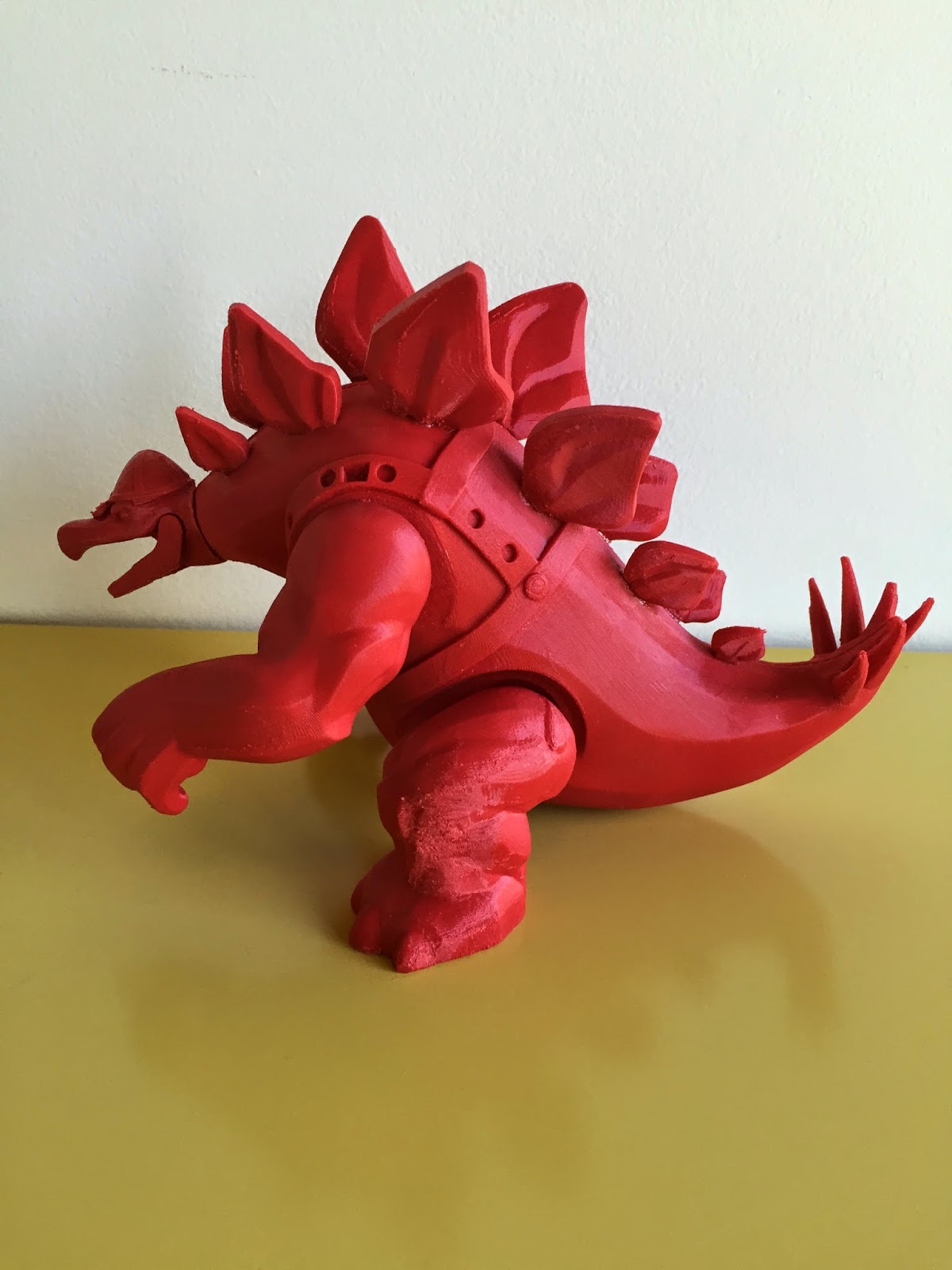 This was an amusing project that reminded me of something I might do as a kid riffing off a TV cartoon in the 80s... Only dark side was the difficulty in actually getting the print to work.  Desktop 3D printers are still very much in Version 1.0 at this point, and it took way too many tries to get good results.  I even had to get a few stitches after a print cleanup with an xacto knife went awry... Like I said, limiting support materials is a very good goal to have.

If you haven't already seen the ABC special that inspired these guys, do it!
Posted by Unknown at 1:02 PM 2 comments:

Adjusted the body pose to give it some turning energy, playing with blocking tube shapes for the hair. Still have a lot to do here... Rhythm of the hair needs work, and the face doesn't turn great from all angles. Then there's the facial features... yep, lots to do! Class will wrap in early January. 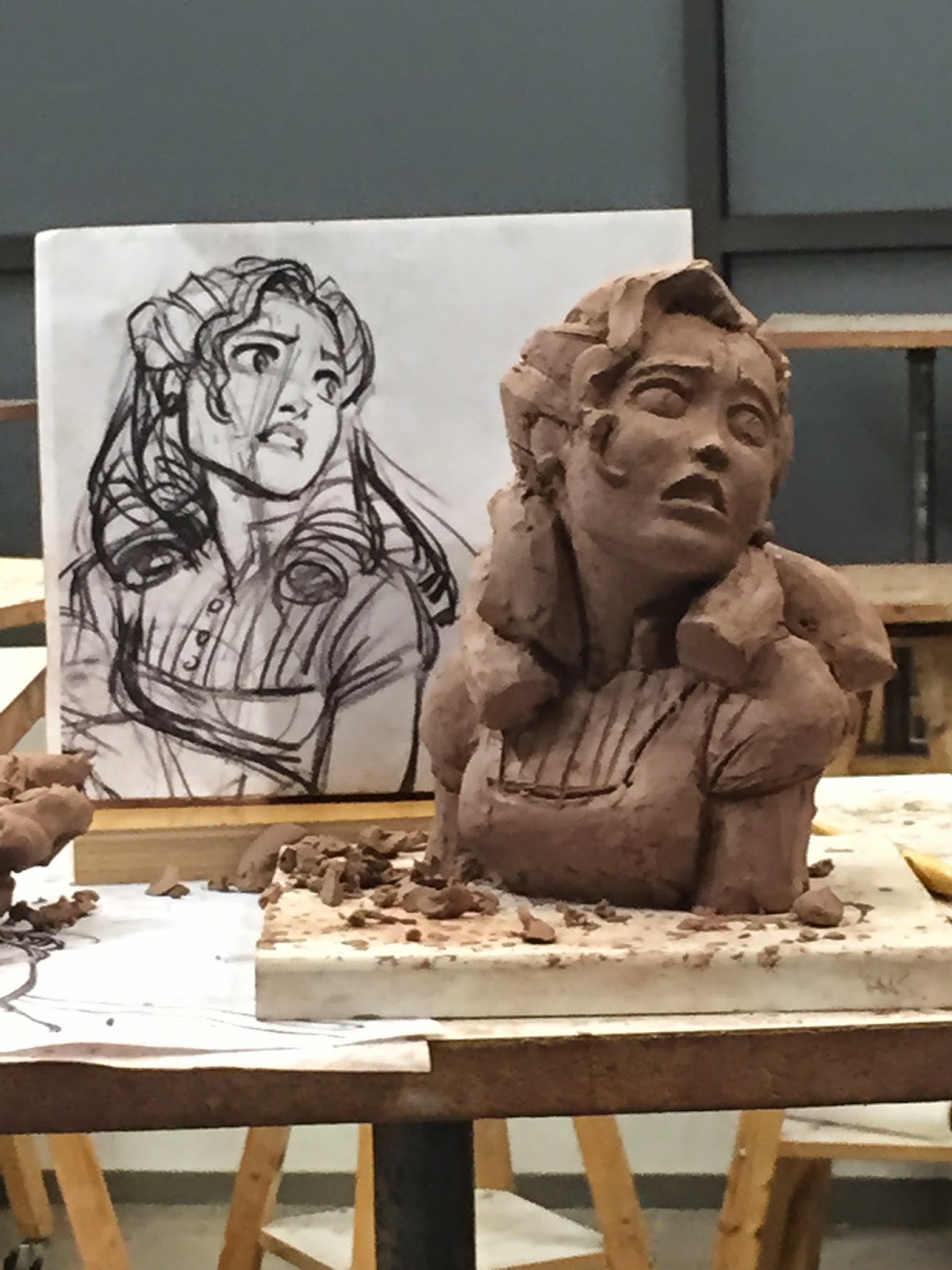 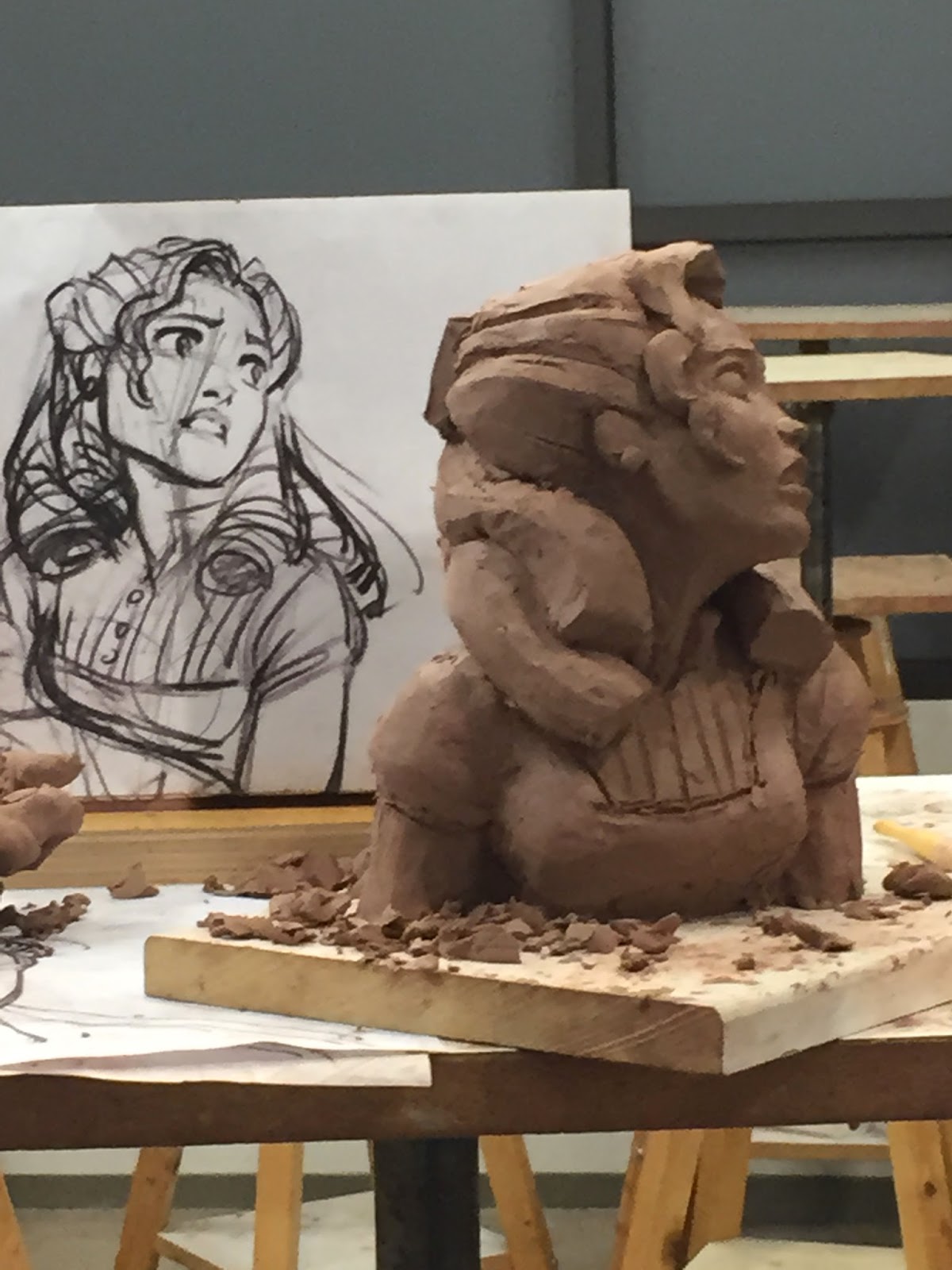 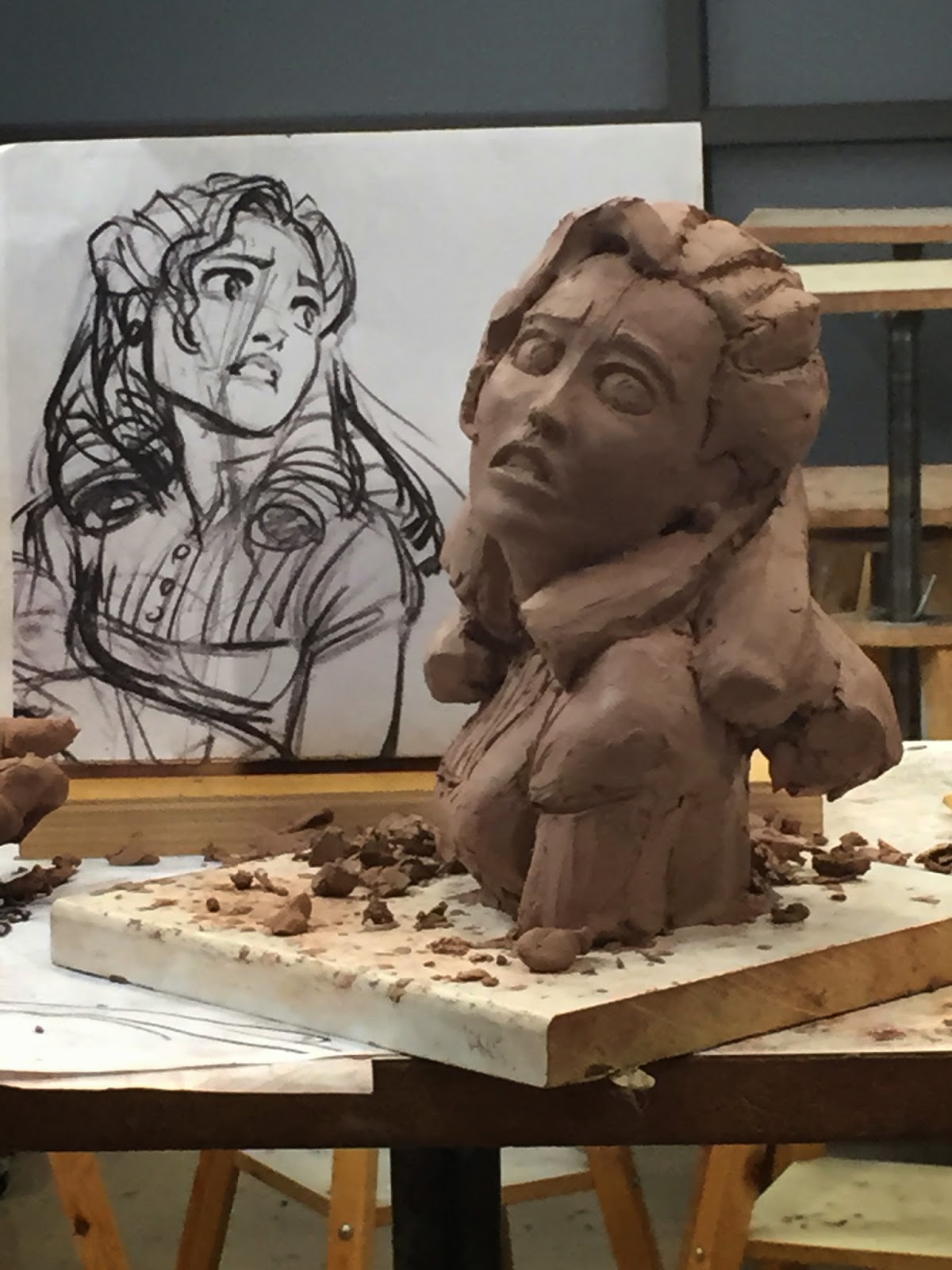 Halfway mark and she's starting to emerge! Stepped back for a significant head adjustment, and explored facial symmetry & rough features today. Anxious to get back in there and get a sense of movement with some significant upcoming changes to the Hair and Body... 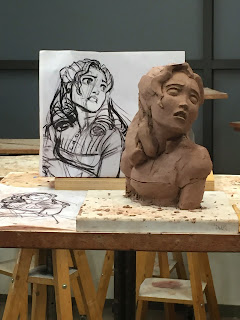 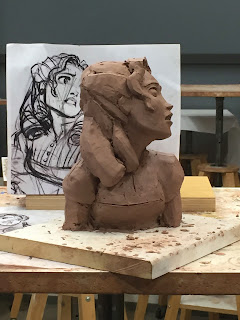 Progress! Facial features and right arm position are still subject to demolition, but after a lot of experimentation with the head angle that's starting to feel better.  As I get into the major hair forms against the silhouette I'll try to push the twisting action. 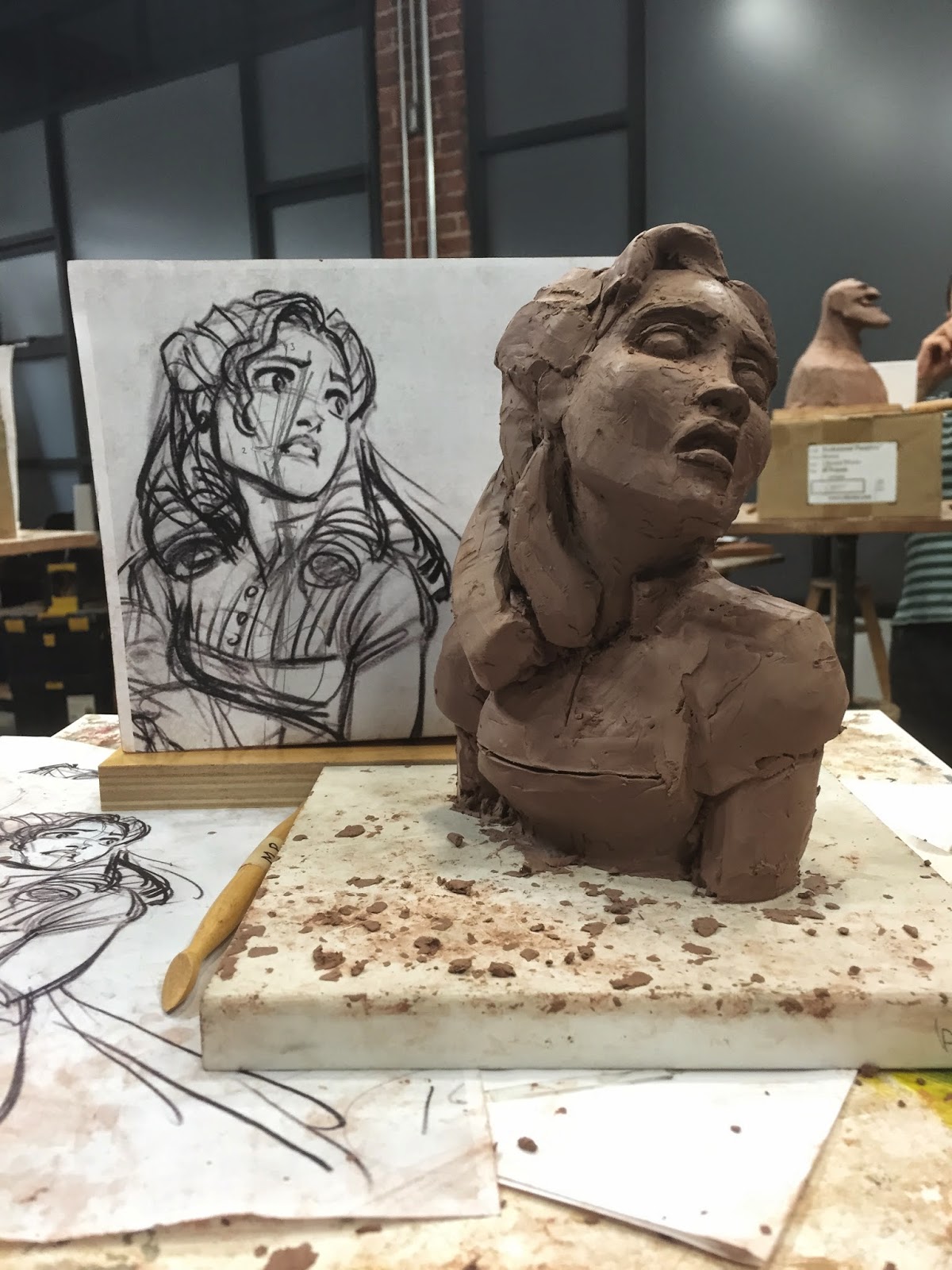 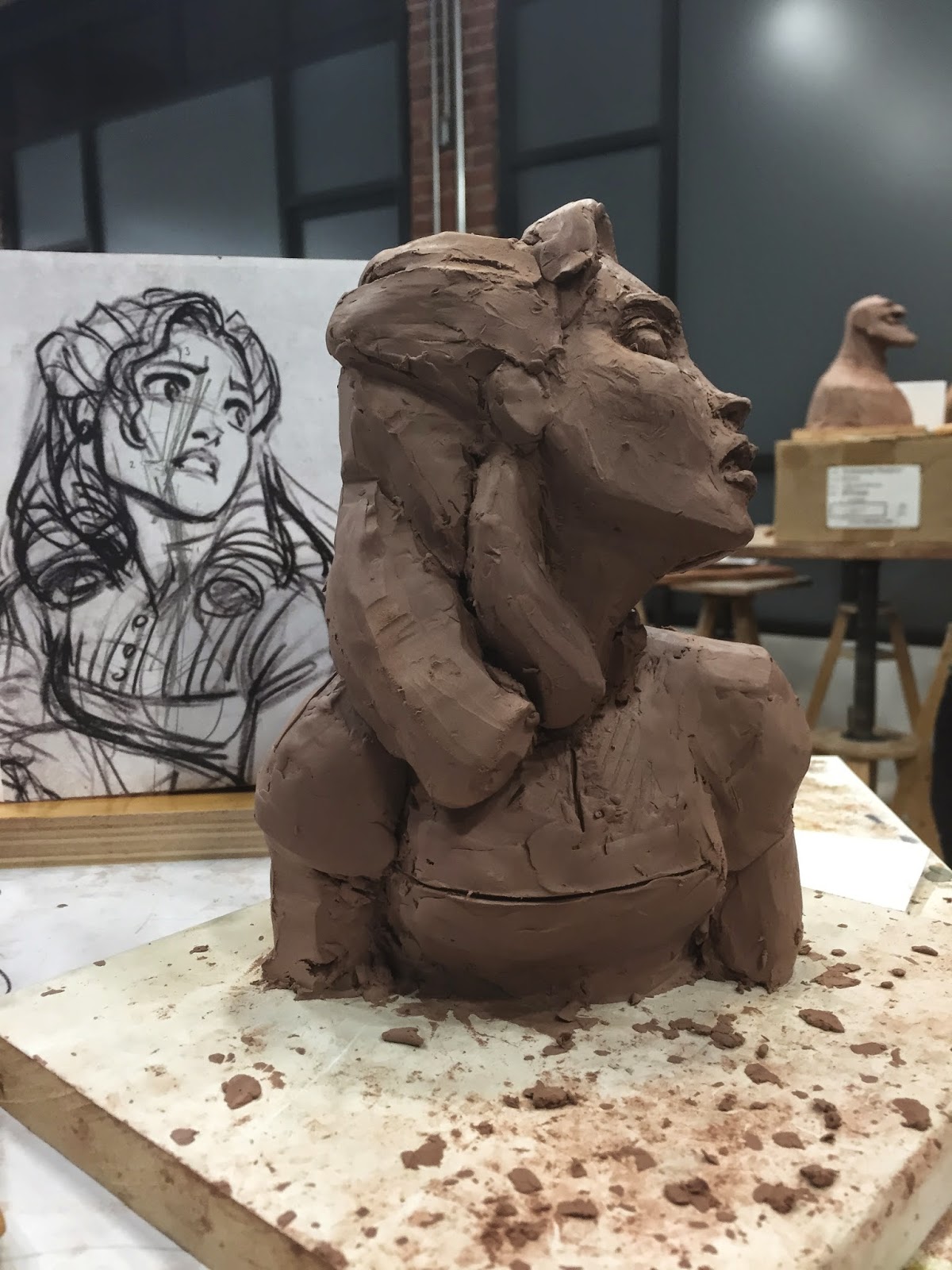 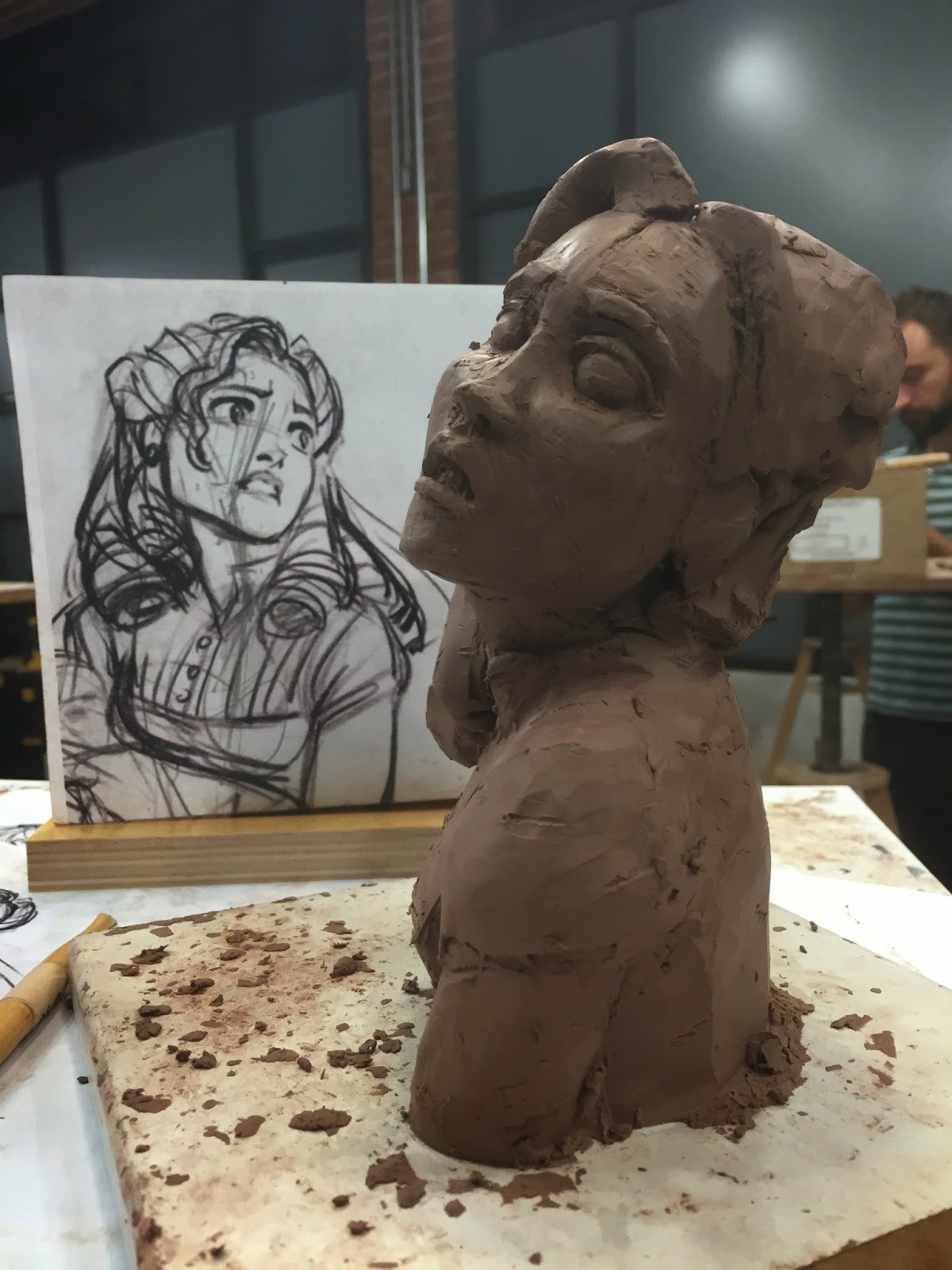